Getting started with Raspberry Pi

Raspberry Pi is a credit-card sized single-board computer which can be used for variety of purposes. The official operating system for Raspberry Pi is Raspbian. Rasbian and Ubuntu both are derived from Debian, providing seamless access to thousands of software package ready to go via Advanced Packaging Tool. Compared to other similar single-board computers Raspberry Pi has vibrant community and plenty of code examples that you can run out of the box. Before you continue make sure you're comfortable with basic command-line usage, if that's not the case take a look at CodeAcademy track for learning command line.

Feel free to improve this wiki page by clicking edit above.

For Linux there is no need to fetch extra tools to write the image to a SD card, simply use dd:

Make sure you flush buffers, otherwise you'll get partial write:

If you're running on Windows, you can use Win32 Disk Imager to write the image to the SD card.

Use USB-UART bridge to power up Raspberry Pi and gain access to the command-line. 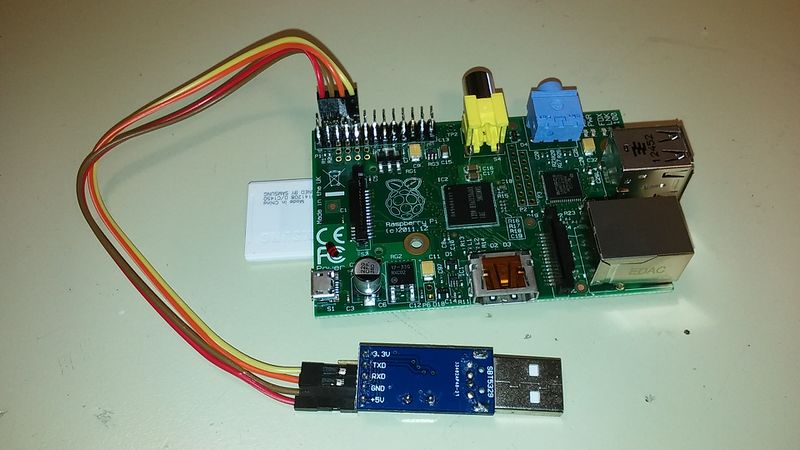 For Linux there are variety of programs for connecting to serial port:

If you get the error message [screen is terminating], you must put your user in the "dialout" group. To do this, enter the following command (only with your own computer):

Then you will see a message that your user has been added to the group dialout. Now log out from Ubuntu and log in once again.

For Windows you need to install driver for your USB-UART bridge first. For Windows 8 use this workaround. Then you can use built-in HyperTerminal, PuTTY or KiTTY for connecting to the virtual serial port.

The default user is pi with the password raspberry. Make sure you change the default password. For more information about user management see Raspbian documentation.

If you're facing issues with USB-UART bridge, simply proceed to network section below.

Raspbian as Debian attempts to request IP address using DHCP on the Ethernet port. This assumes a functioning DHCP server on the network, which is the case most of the time. If you want to connect your laptop directly to the Raspberry Pi you can set up manual IP addresses. The networking configuration is stored in /etc/network/interfaces, remember to issue service networking restart after you've tweaked the configuration.

Use nmap to discover Raspberry Pi on your network:

Don't worry if you mess up the network configuration, you can always recover with the USB-UART bridge method described above.

For more convenient access to command-line SSH is recommended. You can start by installing OpenSSH server on Raspberry Pi:

Assuming Raspberry Pi sits on an DHCP enabled network you can use following on your Linux laptop to connect to remote shell:

Otherwise determine the IP address of your Raspberry Pi, for example with ip addr list:

Make your life easier by setting up public key authentication. Windows users might want to take a look at PuTTYgen instructions.

Note that while you are connected via USB-UART bridge you can simply copy the contents of your public key and paste it to Raspberry Pi as follows:

Once you are comfortable with Raspberry Pi command line and SSH you can do a lot of cool stuff:

In the following examples the LED is connected to GPIO pin 10: 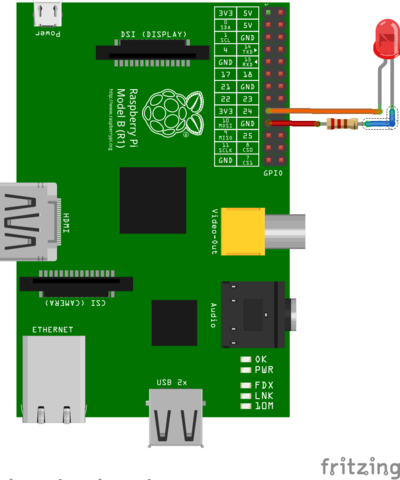 Blinking from the terminal

Raspbian has driver loaded for GPIO pins, so you can control them from shell programmatically.

To blink it from terminal you first have to become a root user.

Then you have to export gpio number 10

And now you can blink your led on and off.

Save this script as a blink.py in the Raspberry Pi home directory. You can use command-line text editor nano to do that, or open up the file remotely with sftp:// or WinSCP.

In nano Ctrl-O writes the file to the disk and Ctrl-X returns back to command-line.

You have to run this python script as a root user, easiest way to do that is to use sudo command in front of python blink.py command

This is a Python 2 webserver example.