Cowsay is a very important program for any up-and-coming Ubuntu user, important in the way that it can starve off boredom for a few seconds. Cowsay runs on Unix-like operating systems, like Linux, and the program can be used by any normal user. Installation can need sudo or root access. Cowsay itself creates an ASCII picture of a cow saying a message the user creates. The program has many functions that let it change the output accordingly, by using specific parameters. Piping outputs of other programs into cowsay is easily doable using the piping command. Cowsay was created by Tony Monroe, in 1999. [1][2]

Over the years, Cowsay became a joke in the hacker culture and has become widespread enough for normal recognition. 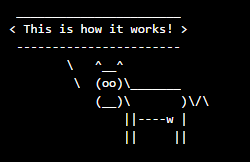 The average syntax for cowsay consists of:

Images were generated at http://textart.io/cowsay, One can do this themselves, should they find the .cow files.

So, all in all, Cowsay is a tool to waste time and have fun with. It is something that can be used in the CLI and can be quicker than launching up a normal game to entertain ones self. The program itself is a known joke in the hacker culture and also has numerous ASCII artist make their works for it.

Article created by Meelis Hass in the Spring semester of 2016